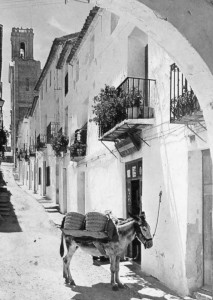 Altea’s Bastion and Renaissance Area was declared a Cultural Heritage Site (BIC) in 2013.

The Bastion conserves its original 1617 structure, with gates giving access to the fortress. The Virgen del Consuelo Church, built between the late 19th and early 20th centuries over the remains of the primitive17th century church, provides character to the ensemble as a whole.

The Calle Mayor street links the Portal Vell Gate to the Church Square.

Calle Salamanca Street: Houses nº1 and nº3 may be of interest in this street. Building nº 5, an inhabited and well conserved house, conserves the local middle-class style of the mid-eighteenth – early nineteenth century practically intact. A Sentry Post has been conserved in the north side of the wall.

Calle Fondo Street: The house at nº 8 Calle Fondo maintains its original 18th century site, united to the town wall with out any type of perforation. An oven from the times of the town’s foundation, discovered at nº 5 in Calle Concepción may also be of interest.