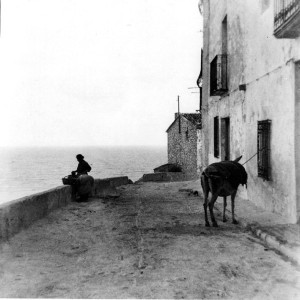 We begin this route by the seaside, where the image of Sant Pere (Saint Peter) reminds us of Altea’s fishing origins. We are at one of the town’s most populated quarters, outside the walls, the Fishermen’s or San Pere’s Quarter, an area of great demographic and economical importance during the 18th century.

Continuing through the Travessera del Prado alley, we come to carrer La Mar street, where various late 19th and early 20th century houses are conserved. Some have been rebuilt, others are new, located along the main national road, which substituted the former Camino Real.It was the first modern expansion in Altea. Our walk continues continues along the Fco. Martínez Orozco street to calle La Séquia street. On the right, at the beginning of calle La Salut, a ceramic tiled image of the Virgen can be observed, which gives its name to the street. We continue our walk by following the directions to calle Sol, where we cross a passageway which leading us to the end of the route, the   Carmelina Sánchez Cutillas square.