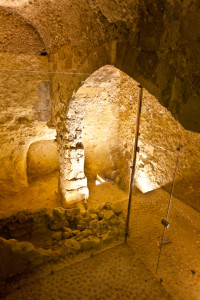 Also known as the “Aljub” (water cistern), it gives witness to a medieval past of which little remains in Altea, but is an example of our land’s ancestral water culture. This water mill is thought to have worked between the 14th and 17th centuries. We can see today how this structure was linked to the medieval settlement of Bellaguarda, on the skirts of the ancient hill on which Altea was later built on. It was supplied with water by the Séquia Blanca, an ancient water irrigation channel, which, in medieval times, probably supplied water to the mill from today’s Pla de Castell area.

Continuing up the stairs, we arrive at the end of the route, the bastion of the Casa de la Señoría, a space currently occupied by the Glorieta del Maño square.