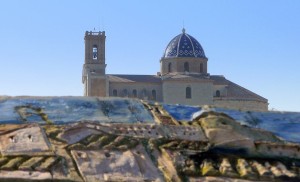 Our itinerary begins in the commercial area and leads us to the ancient medieval Altea once settled on a low hill called Bellaguarda, where one of today’s most characteristic neighbourhoods of the old town is located today.

We begin our route at the Plaza José María Planelles square, where the Town Hall is located, where we can enjoy its café terraces, bars and shops. Following the directions given, we cross the footbridge over the railway line and turn left down calle Tapó de la Llimera street. We then continue down calle La Séquia y la calle Albà streets, which lead us into the neighbourhood, and takes us finally to the Plaza de la Canterería square, where the Bellaguarda Tower can be visited. 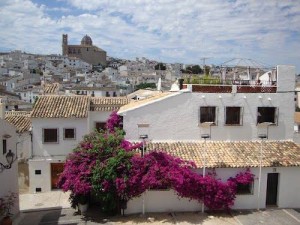 The Bellaguarda Tower, a historical witness to Altea in the Middle Ages, was built over the ruins of a former defence tower. It stood by a 14th century Christian settlement, populated up to the 16th century. The Plaza de la Canterería, thoroughly renovated in 1990, includes a non-historic “reconstruction” of the tower, where the viewpoint we see today was built. The tower and its surroundings occupied the square space formed by today’s Plaza de la Canterería and surrounding houses, as represented in Francisco de Ricaud’s map dated in 1740. The group of houses and its square lead to the old Bellaguarda Mill.

We continue down the calle de la Canterería street, which leads us to Casa Salvà and Casa Picó houses. On the way, ceramic images of Christian virgins and saints may be observed. 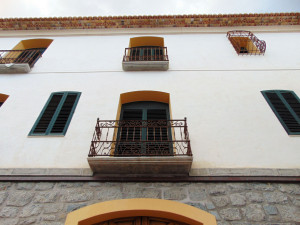 One of the most interesting 18th century Altean houses, it was the first to be built outside the walled enclosure during the early1 8th century by a prominent Altean family. It stands at a key point of access to the town by the old Camino Real. Its architecture is the style of the great ancestral homes of the times, with its rooms opening out with wrought iron grilled windows onto the street. The main living quarters were on the first floor, service and the storage quarters on the floor above.   The building is today divided into various properties. Its façade gave name to the street.

Located next to the Casa Salvá house at the rear end of the Bellaguarda neighbourhood, it was at a strategic position at the north access by the old Camino Real, a privileged place for mobility and access to the fields of the powerful 18th century rural middle-class gentry. The house had a modern structure for its time, of various homes together in one same family building, the ground floor was used for either business or agricultural use.

We continue up Sant Blai street, up the calle del Ángel steps, and finally arrive at the Portal Vell gate. 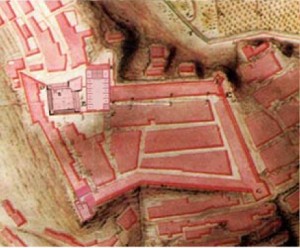 Altea’s Bastion and Renaissance Area was declared a Cultural Heritage Site (BIC) in 2013.

The Bastion conserves its original 1617 structure, with gates giving access to the fortress. The Virgen del Consuelo Church, built between the late 19th and early 20th centuries over the remains of the primitive17th century church, provides character to the ensemble as a whole.

It includes remains of the old Sentry Post, which is thought to have remained as a public right of way along the its perimeter. The house situated at nº 5 Calle Salamanca conserves one of the wall’s sentry posts on its north side.

The Tower (lost element): The area had four complementary defensive elements: The tower next to the Portal Vell Gate, the Castle by the bastion in the south-west corner, the Town Hall and Court House in the in the south-east angle, and the Casa de la Señoría in the north-east angle of the wall.

It was a small square tower situated at the corner by the Portal Vell Gate.

The Calle Mayor street links the Portal Vell Gate to the Church Square.